Have you ever climbed a Volcano? Well..!! I did. Read my story here...

"On getting off from the bus, I turned around and saw a gigantic mountain in front of me for the first time; my jaw and tongue rolled onto the floor, eyeballs got immobile and mind vacant"

Know the preparations you can do for your Japan Trip

Being an Indian, I have never been to any Holy Place in India neither walked any Holy Yatra. But when I was in Japan, I Pilgrimaged Mount Fuji, the highest Peak in Japan. Mount Fuji is one of the three holy mountains of Japan. 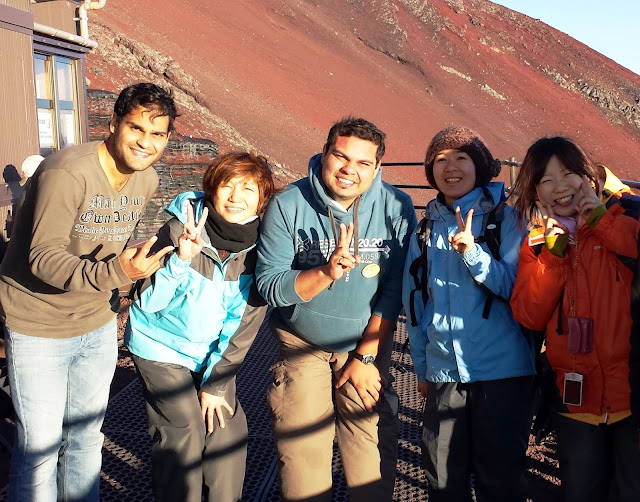 Note: Climbing Mount Fuji was not at all easy as it may sound in this blog post, though it is possible. You just need to prepare yourself well both physically and mentally.

Without a doubt, climbing Mount Fuji with such high altitude is a challenge, but it becomes easier when you get a group of similar people to climb with. My brother and I had no prior experience in hiking and we outright decided to capture the 3776 meters high active volcano.

I have so many memories of those two days, can't think out from where to start. 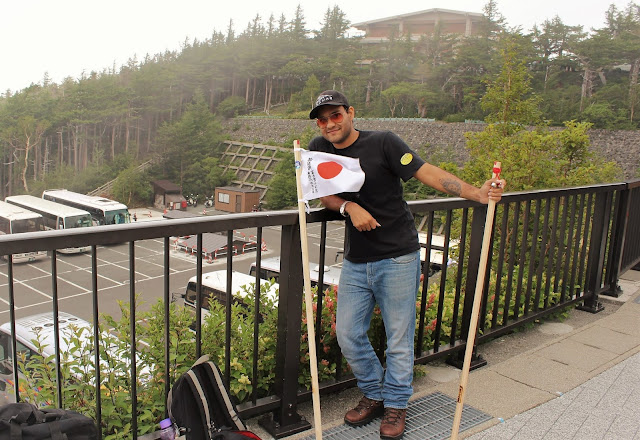 At Mount Fuji Base Camp

Okay, starting from the start...

We booked our Two-Day Mount Fuji Tour and met with our Tour Guide at Sakae Station in Nagoya. Since my brother speaks the Japanese language it was not difficult for us to get instructions from our Tour guide.


Visiting Japan's largest Amusement Park and a Shrine for the first time...

Note: Even if you don't speak the Japanese language, you can communicate easily since most of the operators arrange English speaking Tour Guides for Foreign Travellers

Around 18 Japanese and 2 Indians boarded the bus for the Base Station of 'Mount Fuji'. The bus ride took 4-5 hours to reach the base station from where we had to start our climb. 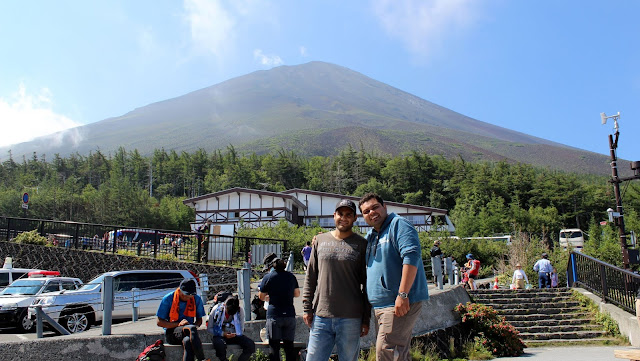 Mount Fuji in the Backdrop, Me along with My Brother

On getting off from the bus, I turned around and saw a gigantic mountain in front of me for the first time; my jaw and tongue rolled onto the floor, eyeballs got immobile and mind vacant.
I still remember saying to my brother, "humme isper chadna h. ye hai Mount Fuji?"

After eating some evening snacks on Day 1, we began our climb that lasted for 12 hours, including 4 hours of rest time.

In a group of 20, we climbed without stopping until 3400 meters. It will be difficult but once in a lifespan experience. You will climb a barren Volcano along with some well cultured and helpful Japanese, to see the sunrise from the highest point in Japan. 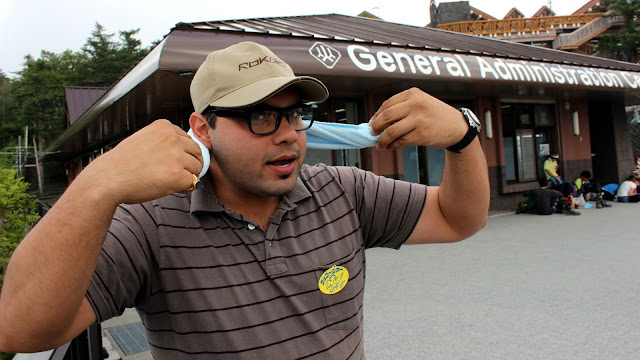 My Brother, before we started our climb up Mount Fuji

On reaching the 8th Station at 3400 meters height, we were served Japanese style dinner and lodged for the night inside a Japanese hut for 4 hours. That hut offered a completely unique experience of Japanese culture.

Note: Prepare yourself to sleep shoulder-to-shoulder inside a sleeping bag. Also, expect simple dorm-type accommodation. Pack some food with you to keep yourself going along the tough trek.

We were woken up around 2 at night to continue with our ascend for another one-half hour to the top of Mount Fuji and experience 'The Land of Rising Sun'. 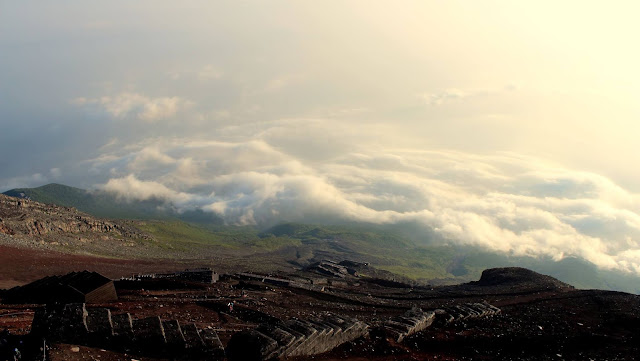 Mount Fuji, when we climbed up and above the clouds

When I almost experienced Hypothermia Shock

Let me tell you guys what Hypothermia is. It is a state when your body temperature falls below the normal 98.6 F or 37 C.

I was physically and mentally well prepared to climb Mount Fuji but was not aware that the temperature on reaching the crater will be so low that my wind-sheeter and pullover won't be of any use. It was very windy and bone-chilling cold on summiting the 3776 meters high Holy Mountain at 4 in the morning. Even our DSLR stopped working under such low temperatures. 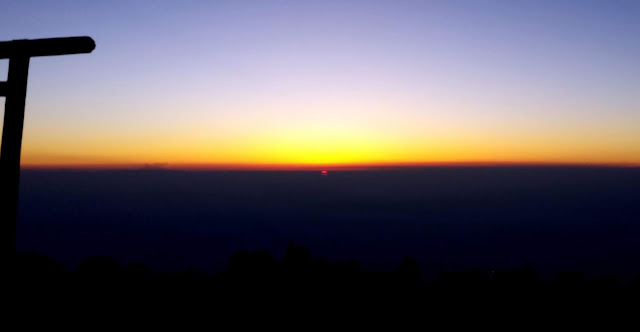 The Land of Rising Sun, Japan. 'FIRST RAY OF SUN' from the top of Mount Fuji

I had to bury myself behind a big rock to survive until 'The First Ray of Sun' kissed my face and I felt a bit comfortable to come out into the sea of hundreds and thousands of people. I could not believe, we were not 20 fellow mountaineers but 20,000.

We were served Hot Noodle Bowl on the top which came as a much-needed relief from the harsh icy winds. 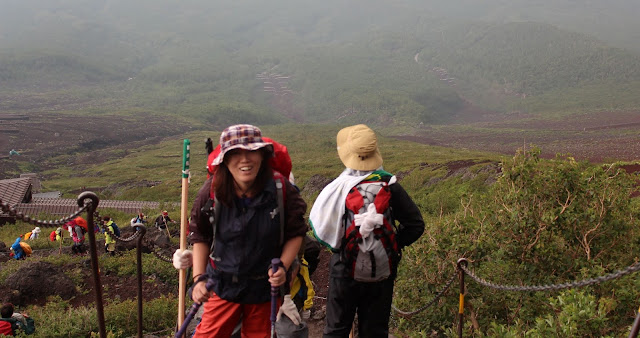 A heartful of Thanks to our Mount Fuji Tour Guide.

After spending an hour at the top and walking around the crater of a volcano, our Tour Guide asked us all to start the descend.

If it was tough climbing up, it was equally difficult to come down, with your full body weight punishing the foot, toe, and calf muscle. 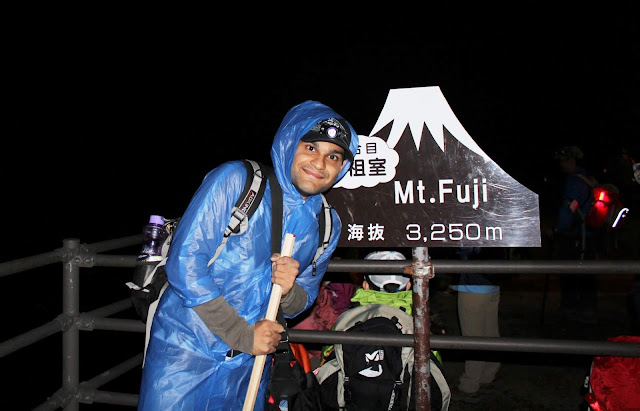 Mount Fuji, only 526 more meters of our climb left to reach the highest point in Japan. Also, the last photograph after which our DSLR got freeze

On our way back to Nagoya, our group visited a Winery, where we were given a tour in the Japanese language, which I obviously didn't understand and a complimentary two wine bottles.

Also, our bus stopped mid-way at a health care center. Inside I took a Sauna Bath and a Spa for the only time in my life so far.

On reaching our home, my brother and I were struggling to even get up from the bed for the next 2 days as our bodies were suffering from the after-effects of trekking for two days.


When I was invited to Lunch by a Japanese Family. Read here...

Popular posts from this blog

May 31, 2020
"Either you learn from your own mistakes or by the mistakes of other" My cousin and I ate five Cholle-Bhature each filled with oil, butter, and fat from an in-famous shop in Lajpat Nagar, New Delhi. With-in an hour, my cousin felt very uncomfortable and uneasy. He started to sweat and breath heavily. My cousin's weight was 113 kgs on that day and mine was 99; t oday we weigh 84 kgs and 75 kgs respectively. Some History... I always had been overweight, right from my childhood. I was the heaviest guy in my school batch. My friends would call me Pumpkin or Santa . I never got offended when someone used to make fun of me as I had accepted the fact, 'I am Fat and that's how I will live'. Almost, everyone in my family is overweight. I had always thought that I am inborn obese.  But now, I have realized "The reason behind my Obesity was my own eating habits and not food". From 99 to 75 kgs My Motivation
1 comment
Read more

July 04, 2020
Got only 24 or 48 hours? Here is the list of Top Places to visit in Cape Town. A City on the western part of South Africa and on the coast of the Atlantic Ocean. I visited Cape Town just after 4 days of my official trip to Durban. Tourist Attraction in Durban Cape Town Aerial View; Image by Sharon Ang from Pixabay When I came to know that, I am going to Cape Town in September 2014, I was filled with joy. I wasted no time in Cape Town to explore the city, squeezing maximum travel into the minimum available time. The very first thing that surprised me was the weather. If it was hot and humid in Durban, Cape Town was much windy and cold, maybe because of the Atlantic ocean. Is South Africa Safe for you to travel? I found Cape Town also better maintained, compared to Durban and Richard's Bay. After two days of exploring Cape Town, I realized it has so much more to offer for a tourist. Enjoying my meal at John Dory's Restaurant with Aditya
Post a Comment
Read more

May 22, 2020
Since this is the first blog of 'My Travel Series', I want you guys to know that I have been to 5 continents at the age of 31. I simply have forgotten the counts of countries I have put my foot on. I had never thought of travelling so much after passing out from college, but my job demanded that; to explore the untouched seas. Motivation Story, How I topped my college from the last ranker Travelling started with my profession; with time it became a hobby & now it is my passion. After travelling extensively for the last 8 years, I have decided to start a blog of my own, a topic on which the internet is already flooded with. My first selfie outside India, Singapore January 2012 Why I decided to start writing after travelling since January 2012? I believe I have gained enough experience, knowledge & skill in travelling. I have managed to plan travel for my Holidays & Professional Trips, on my own. This blog is a way to share my lookou
Post a Comment
Read more

Rohit Mehra
Hi Guys, I am an Engineer by Profession & a Traveller by heart. I repair machines to earn bread/butter & during my off time, I travel to all parts of the world. On my Blog, you will find My travel experiences & Travel tips along with the motivational moments of my life. Come, be a part of my ship & sail with me. Cheers..!!

NO TRAVEL NO FOOD BLOGS